From US Armed Forces Rugby
Jump to: navigation, search 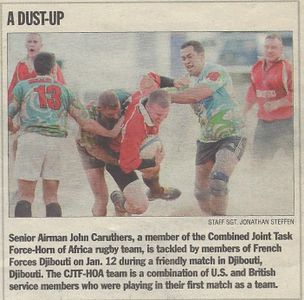 Team organized by Capt (USN) Don Sheehan in 2012
In the words our our first Combined Services coach, "Sensei" CJ Kolson, "Rugby is a game of controlled aggression, ideally suited to the development of the warrior spirit. Physical fitness, mental toughness, spontaneous tactical boldness, cohesive teamwork and decisive leadership are premium qualities of this (our) game"

US Military teams have existed since the 1919 Allied games held after WWI and some of the players involved in those games went on to play in the 1920 Olympics. In the late 1920., we saw Marines in China in 1927-31[[1]] and in the 30s, Marines in Philadelphia. Servicemen have played on a variety of teams until base level teams in the late 1960's began to organize. They were fueled by the service academies who have had rugby history dating from the 60's and one of the more successful base level teams (Pensacola) took part in the Monterey Tournament in the 60s. Other early base level teams were Ft Jackson (AL), Fitzsimmons (CO), and an overseas team in Taipai Taiwan. The first team in Europe, Frankfurt Americans, was started in 1973, and Okinawa Lyons also in the early 70s, but it was not until the formal organization of our national governing body, USA Rugby in 1974, that there began a concerted effort to support military teams. The structure provided for a 'military committee', but it lay dormant in spite of some early volunteer offers until 1979 when it began (providing for a Combined Services Chairman) allowing the opportunity for a USA Rugby Combined Services Committee . The activity of that committee are chronicled in the documents and Minutes of the Combined Services Committee and the on the field club actions in the CS Newsletter which started in 1981 and spanned for two decades keeping military ruggers in touch with each other. Some of this was summarized in the Combined Services Handbooks which were distributed to military rugby team leaders across the globe. There was a documentation of the first Combined Services Women's Newsletter. You can read the subsequent military rugby history that led to the adoption of rugby into the official DoD sports programs, which followed the lead of the Marine Corps who gave 'official' status to the game in 1988. Up until that time, the Combined Services Committee worked under their own guidelines, an example of which can be found in the 1989 Handbook [[2]]

Click here to go to the sites for the -> service academies